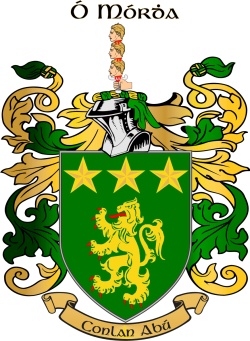 There are approximately 973,162 Moore family members around the world. In general you can double this figure to include those related to the Moore names to allow for those connected to the name through maiden name connections.

An English locative name from Middle English more ‘moor, marsh, fen’ or an area of uncultivated land (Old English m?r). Hence topographic name for someone who lived at a moor or toponymic from Moore (Cheshire), More (Shropshire), or any of numerous other places named the same term.

A Norman English relationship name from the Middle English personal name More (Old French More, Maur, Latin Maurus ), originally denoting either ‘a Moor’ or someone with a swarthy complexion.

In 1881, the surname was widespread across England and was particularly frequent in the county of Kent with 2,168 occurrences.

1860 Lower, Mark A Patronymica Britannica: a dictionary of the family names of the United Kingdom, London: J.R Smith. Public Domain

Tell us about any famous MOORE (or surname variant) you think we should add here. We will get our genealogists to check them out and add them to the list. Thanks!

Join the conversation with the MOORE tribe

I have he's my uncle

hi all my name is James bristoll me and my mom (Linda Dutton ) are doing are family tree on the Moores name as its my great grans Eliza Moore who married Arthur Blundell who both lived in Birmingham .I have gone back to the 1800s in Birmingham and have reached a dead end but we are waiting on a ancestry DNA to come hopefully it will help us , if any one can help it would be very helpful

hi all my name is james bristoll and working with my mom on our family tree , We have Moores in are line to my great gran Eliza Moore who married a Arthur Blundell her dad is Thomas Moore so far I have gone back to about 1800s and that we all lived in Birmingham I cannot find out anymore about them but we are currently waiting on a ancestry DNA test to come back and hope it will give us a little help on where the Moores are from all the best jame

Checking out our family's heritage in Dublin

(Part 1 of 3) The Moore name has a long history in the British Isles, but now DNA and some recorded history says its origin is from the north-west region of the Emerald Island. The Moore story [dominated by DNA tribal marker R1b-L513, Subgroup D2] can trace their beginnings to the Finn Valley in Donegal, Ireland from 50 BCE. Perhaps the journey begins with the Clanna Dedad; Deda, son of Sen or Deda Mac Sin. The Moore surname origin is from the Cenél Conaill [R1b-L513, Subgroup D] who found the Dál Fiatach.

(Part 2 of 3) A group will also found the Kingdom of Ercing in Wales as trade with Romans will become essential around 300 CE. But how could this be? Recent discoveries from DNA testing are unlocking the migration patterns of Celtic tribes as late as 800 CE to 1200 CE. The Moore story begins in pre-history Ireland but this line and many of his kin will move to Wales, then travel to Brittany, France during the Dark Ages.

Looking for O'Mores (Leix) who would be willing to have their DNA tested, fee paid. Or O'Mores who have already done so. Alvin William Moore awmoore@cableone.net

I am looking for some of my family anyone related to robert moore in ocoee florida?

My location listed is North Carolina, USA. Which is incorrect. I am located in Southwest Missouri, USA. Near Joplin.

Areas of Origin for MOORE

Write an email address and click 'Invite' to share this page with more members of the MOORE tribe.

Discover where the MOORE Family members live around the world

Show off the MOORE Family Crest…