5,716 KAVANAGH members around the world 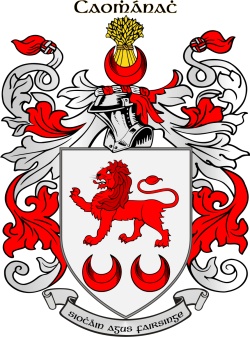 The surname derives from the Irish personal name ‘Caomhán’, which is a diminutive of ‘Caomh’, which according to Woulfe (‘Sloinnte Gaedheal is Gall’, 1923) means ‘comely, mild’.  This surname should not have the prefix Ó.

The great Kavanagh family of Leinster is descended from the notorious 12th century King of Leinster, Diarmaid Mac Murchadha or Dermot MacMurrough, whose appeal for military assistance from the Norman Strongbow brought on the 1169-70 Anglo-Norman invasion of Ireland.  Almost all the descendants of this Leinster king are now bearing the surname Cavanagh/Kavanagh, although certainly the Kinsellas and possibly some Murphys could claim like descent.

AD1169 Annals of the 1V Masters: ‘The fleet of the Flemings came from England in the army of Mac Murchadha, i.e. Diarmaid, to contest the kingdom of Leinster for him’.

The Cavanaghs or Kavanaghs are named from their ancestor Domhnall Caomhanach or Donall Cavanagh, Dermot’s son.  The father and son at the head of 500 of their men took part in the Norman attack on Wexford, led by the knight Robert FitzStephen, in 1169/70.

The great Art MacMurrough Kavanagh, King of Leinster, who died in 1418, expanded the power of the clan, and his territory roughly extended over modern Co Carlow and part of Co Wexford.

LEIGHLINNBRIDGE is possibly the earliest site associated with the MacMurrough Kavanaghs. At the northern approach to the village is the site known as Dinn Righ or ‘hill of the kings’, which was the family’s seat, now represented by a sculpture of ‘thrones’ of these ancient kings.  The nearby castle known as Black Castle was built by the Normans soon after the invasion.  The Cambro-Norman Carews settled here and built the first Carmelite priory in 1270.

Art Óg Caomhánach, also known as Art McMurrough Kavanagh, defeated the English forces, and killed Roger Mortimer, at the Battle of KELLISTOWN in 1398.

FERNS is where Dermot MacMurrough was buried in 1171.  He had founded the Augustinian Abbey in 1158. Ferns, in fact, had long been the capital of Leinster and the chief seat of its kings.  The castle here was built by the Normans in the 13th century.  It is probably here that Donall Kavanagh was murdered in 1175. The Normans are the chief suspects; and it is not too difficult to work out why.

NEW ROSS was burned by the great Art McMurrough Kavanagh in 1394: Annals of the Four Masters: ‘An army was led by Art Mac Murrough, King of Leinster, against the English; and he burned Ros-mic-Triuin, with its houses and castles, and carried away from it gold, silver, and hostages’.

Art Kavanagh was the greatest of them all.  His long war with Richard 11’s army is the stuff of legend.  He was finally poisoned by his enemies in New Ross in 1417.  Former Chief Herald, Dr. MacLysaght (‘Irish Families’, 1982) states that today’s Kavanaghs/Cavanaghs are directly descended from him

AD1395 Annals of the 1V Masters: ‘The English of Leinster attempted to make Mac Murrough (Art) prisoner, by treachery; but this was of no avail to them, for he escaped from them by the strength of his arm, and by his valour, so that they were not able to do him any injury’.

Tell us about any famous KAVANAGH (or surname variant) you think we should add here. We will get our genealogists to check them out and add them to the list. Thanks!

Join the conversation with the KAVANAGH tribe

My last name is Kavanagh, I live in Quebec and I speak French. My ancestor would have come to Montreal around 1760 and apparently came from Dublin Ireland. His name was James Cavanagh but as we spoke French he was called Jacques. The family name has been written in several ways: Cabanis, Cabanac, Cavanagh or Kavanagh. He would be the son of John Kavanagh and Mary Ann Cluny. He married on February 4, 1760 in St-Laurent (Montreal suburb) with Marie Catherine Gauthier who spoke only French. Our family has almost always lived around Montreal and on the north shore. I would like to know if anyone has any information about this James Cavanagh born around 1742 in Dublin and when and why he immigrated to Montreal.

My Dad Edward Kavanagh of Dublin, I never met my grandad ( my dads dad) have you any information please?

Funny you say it doesn't take an O fada. I have always put the O fada in because a teacher in my Irish primary school called me that. So that was it. I took that name O Caomhanach. Sounds so weird now without the O.

Areas of Origin for KAVANAGH

Write an email address and click 'Invite' to share this page with more members of the KAVANAGH tribe.

Discover about where the KAVANAGH live around the world

Show off the KAVANAGH Family Crest…