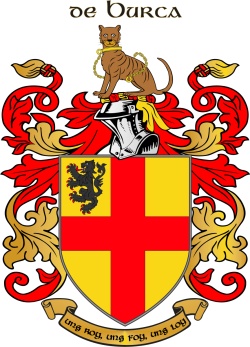 Design your own BURK Family Crest

William de Burgh arrived in Ireland shortly after the Norman invasions of the 1170s. He was made Lord of Connacht and acquired lands there, and Munster, where the baronies of Clanwilliam are named after him. (MacWilliam was a byname). Richard Mor de Burgh, his son, extended their power; some descendants became known as Clanricarde (Clan Richard), fearsome warriors throughout the late Middle Ages and beyond. These Normans likely derived their name from Walter de Burgh of Burgh Castle in East Anglia; there is also a legend that they descend from Robert de Burgo, half brother of William the Conqueror. In any case there are early continental forms of the name, - burg is fort in Old German - Walter is also a Germanic name.

In Petty`s 1659 Census, Bourke/Burke is given as a Principal Irish Name in Clanwilliam Barony, Co Limerick (where there are several `tituladoes` or landowners of the name also) and Limerick city.

I am looking for a possible connection here. My family name is Kleinrichert (ClanRicarde) and we think there is a name change that connects the two. I am interested in finding out more about the clanricarde family descendants to see if there is actually a potential connection

Hello, can you tell me if my surname BURKS is the same as BURK?, Is the letter S on the end a variation of the name BURK?. Thank you, Michael Burks.

Hi Michael, Yes the Burk, Burks, Burke and Burkes families are all from the same tribe. Regards, Stephen

Write an email address and click 'Invite' to share this page with more members of the BURK tribe.

Discover where the BURK Family members live around the world

Show off the BURK Family Crest…