0 Styria Diaspora around the world 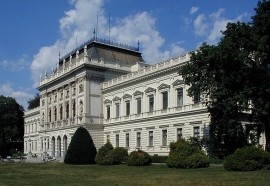 Graz_University_main-front - By de:user:Dr. Marcus Gossler (Own work)
[GFDL or CC-BY-SA-3.0], via Wikimedia Commons 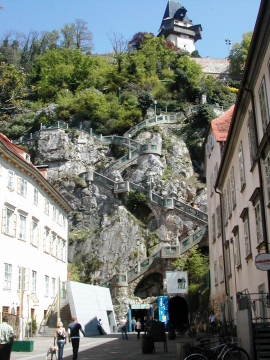 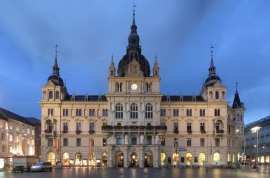 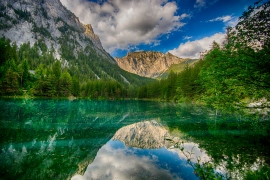 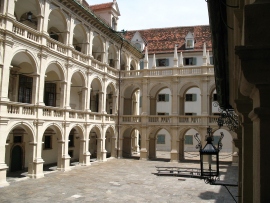 The name derives from the seat of the people that used to rule over the region: Steyr. Steyr today is in Upper Austria, however, the name still stands.

Styria is known to be the green heart of Austria as 60% of the region are covered in forests, and Styria is the major producer of wood in Austria. The region is also known for its locally grown food, the wines, and the locals' love for food and drink. In Styria, you can basically eat only foods that have been grown locally, and enjoy drinks that also have been produced locally (from fine wines to apple ciders). Styria is the region to go to if you would like to combine outdoor adventures with a relaxing atmosphere, good food and good drinks.

However, Styria is also known for being the home of the Roman ruin city of Flavia Solva.

A very famous export of Styria is the world-renowned actor Arnold Schwarzenegger, who was born in Styria (he was born in Thal, which is close to the capital Graz – so if you are a fan, you could visit the man's hometown).

What should you see and do while you are in Styria?

In winter and summer alike, Schladming is a village that is very popular with tourists. In winter, it attracts people who are interested in winter sports, and many competitions that place in the mountains around this friendly village. In summer, the village attracts the hikers and bikers who would like to explore the region on foot or on bike. The village has all the shops you need, and there are also plenty of places that cater for tourists specifically. Even though it is a touristy place at times, you can also gain some insight into the local culture and history if you are truly interested in it.

The mountain with the name Hoher Dachstein (“high roof stone”) is the second highest mountain in the Northern Limestone Alp, and the highest point in Styria (but also the highest point in Upper Austria, as the two regions both share the mountain). The mountain is often called the mountain of the three regions as a little bit of the mountain also belongs to Salzburg. If you stay somewhere close to the Hoher Dachstein, you could easily combine your stay in Styria with a trip to the city of Salzburg, or even spend a day or two in Upper Austria. Many people just want to stay there to enjoy the magnificent view on the mountain (and as with all mountains, you should not attempt climbing it unless you know what you are doing). Unfortunately, the mountain is VERY popular with climbers. On good summer days, it can happen that there are over one hundred people who attempt to get to the summit. This leads to a bit of a traffic jam in the narrower places, and it is good if you are aware of this problem.

The Gesäuse National Park has been a rather inaccessible part of Austria for a long time, but these days it is a very popular place for lovers of the outdoors. Rivers (which give the region the name, as the word Gesäuse refers to the noise the rivers and streams make), forests, and high mountains turn this national park into a paradise for people and animals.

Flavia Solva is the only surviving Roman City in Styria, i.e. a ruin city to be precise. The digs are still ongoing, and the uncovered remains are accessible for visitors. It is a great place to visit if you would like to learn more about the Roman history of the region. Flavia Solva is easily accessible from the city of Leibnitz, so it would be ideal for a day trip if you stayed in Leibnitz.

Graz is the capital of Styria, and is known as a student city. Of course, for tourists it is more important to know that the old part of the city is one of the best preserved old city centres in Europe, and there is a lot to see if you are interested in culture, heritage, history, and art. Graz also has plenty of research facilities in case there is something you would like to have a better look at, or if you visit the region to learn more about your own heritage.